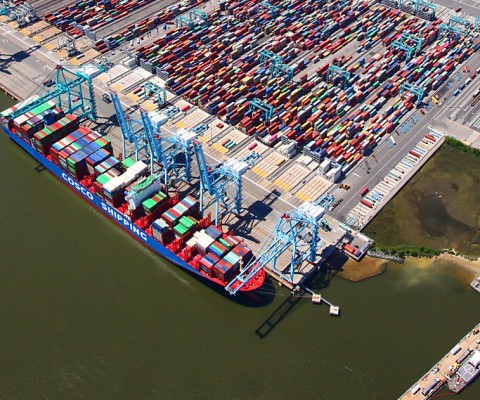 Describing the upgraded Port of Virginia as the “most modern, efficient and most productive in the Western Hemisphere,” state officials, port executives and Virginia Gov. Ralph Northam today announced the completed $320 million expansion of the port’s Virginia International Gateway (VIG) facility in Portsmouth.

“The completion of the VIG expansion … cements Virginia’s status as home to a world-class port,” Northam says. “That reputation will help drive economic investment and job creation across the commonwealth.”

The VIG terminal now features the largest cranes on the East Coast, four 170-foot-tall ship-to-shore cranes, which arrived at the port in the January. The project increases cargo and container capacity by expanding the berth at VIG another 800 feet to accommodate as many as three ultra-large vessels at once. The port also added 26 rail-mounted gantry cranes at the terminal, creating more room to stack and sort shipping containers.

The port system’s overall goal is to expand capacity at VIG and the port’s other major marine cargo facility, Norfolk International Terminals, by 40 percent in the next 14 months.

“Today we celebrate a major milestone in the most ambitious construction project ever undertaken at the Port of Virginia,” says Virginia Port Authority CEO and Executive Director John Reinhart. The port launched the project in early 2017.

As a result of the improvements, port spokesman Joe Harris says, the port is achieving best-in-class results, significantly increasing daily productivity. “On a day-to-day basis, we’re moving more cargo than we did this time last year,” Harris says, noting that the Port of Virginia handled a record 3 million TEUs of cargo in 2019, up from 2.85 million TEUs in 2018.

Virginia International Gateway is owned by a private infrastructure investment group, Alinda Capital Partners, and Universities Superannuation Scheme Ltd., a pension fund based in the United Kingdom. The Virginia Port Authority manages and operates the VIG terminal through a leasing agreement with its owners that runs through 2065.