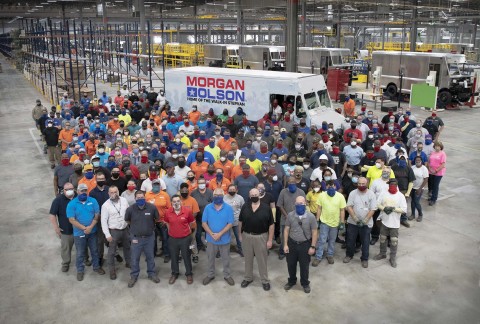 Ringgold, VA – July 30, 2020- In October of 2019, Morgan Olson President & CEO Mike Ownbey publically shared, “Morgan Olson’s Ringgold, Virginia plant will be operational by June of 2020.” Morgan Olson took ownership of the building in March of 2020 and within four months, transformed the previous furniture manufacturing plant into a 925,000-sq.-ft., state-of-the-art automotive manufacturing facility that is now operational.

There are not many businesses during the COVID-19 pandemic that are building new plants and providing meaningful, long-term career opportunities. Morgan Olson’s step vans are in demand more than ever, delivering essential supplies and services.

Mr. Ownbey adds, “The step vans we make are delivering life-saving medical supplies to hospitals and homes. Our step vans also deliver food and water to people’s doorstep. Even our municipality step vans are hard at work, providing cities with infrastructure support to power and gas companies all across our nation. Now add that the vast majority of anything ordered online is being delivered by Morgan Olson package delivery step vans. Morgan Olson is growing, and this new Ringgold, Virginia plant is essential to supporting to these many needs.”

City Manager Ken Larking announced today the selection of Corrie Teague Bobe as the director of economic development for the City of Danville.

Bobe has served as interim director since the departure of Telly Tucker, who left in January to take a similar position in Arlington County.

“Corrie has done an excellent job leading the department for the past several months,” Larking said. “She has worked tirelessly on behalf of our community for nearly 11 years, and I am thrilled that she will be directing our economic development effort for, hopefully, many years to come.”

Mayor Alonzo Jones applauded Bobe’s selection, saying, “The City Council has worked with Corrie for a number of years, and we have great confidence in her. Without a doubt, Corrie is the right person to lead our incredible economic development team and maintain the spirit of collaboration in our region.”

The project will create 22 new jobs and the company has committed to sourcing over 90% of hemp purchases from Virginia growers, resulting in more than $70 million in payments to Virginia farmers over the next three years. Using state-of-the-art equipment, the company expects to be able to process up to 5,000 pounds of industrial hemp per day, primarily grown by local farmers, most of whom are current or former tobacco farmers.

“Encouraging the development of new markets for Virginia farmers is one of our top priorities for growing the Commonwealth’s agricultural economy,” said Northam. “I am pleased to see that industrial hemp continues to create opportunity and economic vibrancy in rural Virginia, and I congratulate Halifax County, Blue Ribbon Extraction, and all other partners involved in bringing this important new processing capacity to our Commonwealth.” 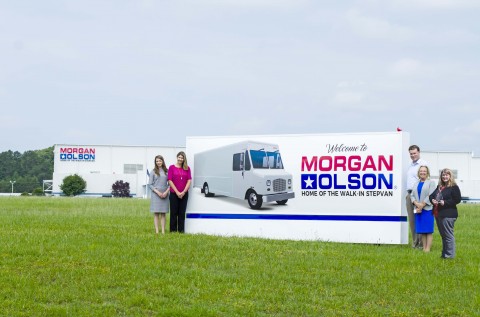 The Virginia Economic Developers Association (VEDA) is pleased to announce it has awarded its 2020 Community Economic Development Awards (CEDA), recognizing a multi-faceted collaboration between Pittsylvania County, Danville, and the Southern Virginia Regional Alliance, that resulted in a regional resurgence of new jobs and investments.

The CEDA awards are designed to recognize outstanding communities in the Commonwealth for efforts in advancing economic viability through economic and community development programs. Entries are judged on factors that include innovativeness, transferability, community commitment, and the benefits derived for each.

There were nine total CEDA entries this year.

VEDA will submit the two winning entries to the Southern Economic Development Council (SEDC) for consideration it its similar award program that takes place later this year.

"Each year, we enjoy taking the time to recognize and reflect on the outstanding work of economic developers across Virginia and to honor those who dedicate their careers to making our communities thrive," said Bedford County Economic Development Director Traci Blido, chair of VEDA's CEDA awards committee. "Those communities being recognized are effectively using multiple tools in the economic development toolkit to bring in new jobs and investment in Virginia, and others can learn from their best practices."

Pittsylvania County, Danville, and the Southern Virginia Regional Alliance were jointly recognized for their efforts to build on a long-term plan to regain jobs and investment in the region. This team of economic developers maximized resources and worked together to lay the framework for collaboration, backed by regional agreements, creative financing and aggressive incentives. As a result, the region has been able to land new deals and deliver workforce programs to serve new and existing industry. New projects to the region include Porcher Industries (BGF Industries), Harlow, Gefertec, Morgan Olson, and Aerofarms.

Today members of the Staunton River Regional Industrial Facility Authority (RIFA) announced a local performance agreement they had reached with Staunton River Plastics Inc, a manufacturer which will bring 200 new jobs to Hurt.

Leading the announcement was the Staunton River RIFA chairman Sherman Saunders as he stood atop a stage constructed in the grass field of Wayside Park.

“I am proud of the partnerships that have been forged between the City of Danville, Pittsylvania County and the Town of Hurt in order to encourage investment and job creation within our region,” said Saunders, one of the three members of the Staunton River RIFA which come from the Danville City Council. “As Chairman of the Staunton River Regional Industrial Facility Authority, we welcome Staunton River Plastics, LLC as the first tenant within the Southern Virginia Multimodal Park. By expanding its footprint into Hurt, this company will provide quality employment opportunities for residents throughout the Southern Virginia region.”

Ennis, a wholesale manufacturer and supplier of print products, plans to make capital investments of more than $800,000 and create 15 new jobs at its plant in Chatham where it already employs more than 100 people.

The Pittsylvania County Board of Supervisors signed off on a performance agreement with the Industrial Development Authority and the company during a Tuesday meeting. The announcement comes during a time when many local businesses are slowing or shutting down.

“This community is going to need any and every job it can get,” said Matt Rowe, economic development director for Pittsylvania County.

The Texas-based print product manufacturer has maintained a plant in Chatham for more than 70 years. The Chatham plant makes business forms. 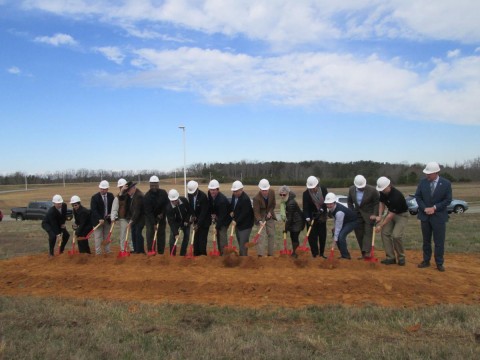 Only a small amount of dirt was unearthed Friday morning at a groundbreaking ceremony at the Southern Virginia Technology Park, but it was the beginning of something big for Halifax County.

County officials, along with Halifax County Industrial Development Authority (IDA) staff and board members and project investors, all grabbed a shovel and with a celebratory flourish broke ground at the future site of a shell building to attract businesses and industries to the county.

The real work begins this week when contractors will start construction on the shell building. The Samet Corporation, a company based in Greensboro, North Carolina, is the contractor for the construction project.

“I look forward to the dawn of the new era in economic development in this community,” said Brian Brown, Halifax County IDA executive director. “The building will provide a competitive advantage and allow Halifax County access to many of the business opportunities we were not able to compete for in the past.”

Brown added that the shell building would suit the needs of businesses in today’s fast-paced development climate.

“Businesses want to be able to move quickly without the uncertainties common in green field development,” Brown said. “The shell building allows a company to use the building footprint to customize the interior and meet the individual business needs without timely delays and offers an option to expand the facility for long-term development plans.” 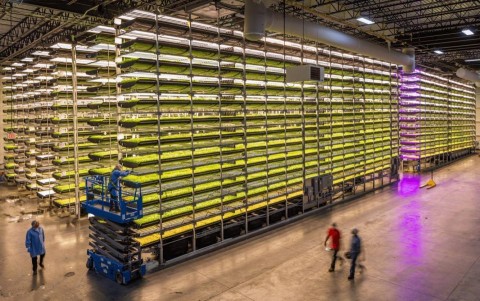 “AeroFarms is a leader in agricultural innovation with farming technologies that make high-quality, local produce available to more communities,” said Governor Northam. “We are bringing capital investment and economic opportunity to rural Virginia by recruiting innovative companies like AeroFarms. I thank the company for choosing Virginia for this important venture and commend Danville-Pittsylvania County for helping to secure this project.”

Founded in 2004 and headquartered in Newark, New Jersey, AeroFarms is a mission-driven company committed to growing the best plants possible with processes that use significantly less water and no pesticides, while offering extremely high levels of food safety. By hiring locally and creating year-round employment, AeroFarms is able to grow all year to nourish its communities with high-quality produce that delivers optimal nutrition and flavor.

“Agriculture is Virginia’s largest private sector industry, and the Commonwealth continues to be on the forefront of agricultural advancements,” said Secretary of Agriculture and Forestry Bettina Ring.  “I look forward to working with AeroFarms as they expand the use of agriculture technology to strengthen Virginia’s food system and provide increased access to healthy foods.”

Amazon Web Services (AWS) is driving fiber optic cable innovation at a rapid pace, resulting in frequent releases of new hyperscale products and solutions, which represent the next generation of fiber optic networks and require training on state-of-the-art equipment to install and operate. Identifying this need to train workers for today and the future, AWS and Sumitomo Electric Lightwave are working together to host Fusion Splicing Certificate Courses at local community colleges across the United States. 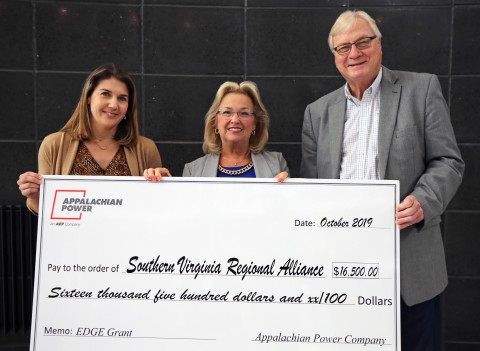 “We are thankful for the support that Appalachian Power provides to our area and for this grant funding to market the region,” said Mark Gignac, Board Chair for the Southern Virginia Regional Alliance. “We value their ongoing support of the electric infrastructure that provides high quality and cost-effective pricing to attract and retain jobs in our region.”

A total of $125,000 was recently distributed among organizations to help support local economic development efforts ranging from site development and strategic planning to marketing. The funds were provided by Appalachian Power in the form of grants to government and nonprofits that oversee programs and initiatives tied to economic development.